Hot on the heels of last years split with Dropdead, Converge return with a similar joint offering, this time sharing a 7" release with Blightys very own noiseniks Napalm Death. 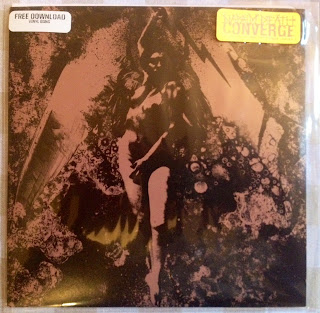 The cover art is as always done by Jacob Bannon and it actually looks way better than my picture is doing it justice here, black and a kind of copper colour, it's actually really striking and up close you can see every fine line of the art work. 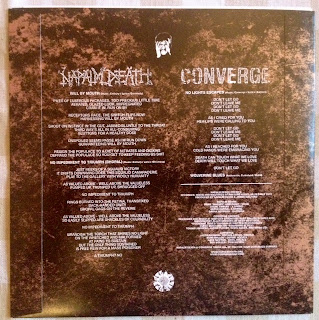 On offer are two tracks from both bands. As you can probably imagine, neither band are reinventing themselves here, if you know these bands you know exactly what you are getting. Converge Offer a new track in 'No Light Escapes' (incorrectly written as No Lights Escapes) which smashes in at around 1 minute 30 and is Converge doing what Converge do frankly but it's a good track and whets my appetite for their new album. They also offer up a cover of Entombed 'Wolverine Blues', I'm pretty pleased about this as I like that track a lot and Converge do a good job of covering it.
Now I'm not the biggest Napalm Death fan in the world, I don't mind them and I've got a couple of their albums on my iTunes, but they've just never grabbed my attention particularly. However the second track on here 'No Impediment To Triumph(Bhopal)' is actually pretty damn good and actually has a bit of melody (well as much melody as Napalm Death are ever gonna offer up, I'm not talking pop punk), I like it.

It's not the first time I've found myself liking the Death actually, back in the late 90's I had a tape player alarm clock. Problem was I'd put music in it I liked and would always end up falling back asleep instead of getting my ass out of bed. My solution was to put a Napalm Death tape I had lying around in, with the thinking that this 'shit' would get me out of bed and reaching for the off button. And that worked for a day or two until I started to find myself actually liking the damn songs!! What a story. 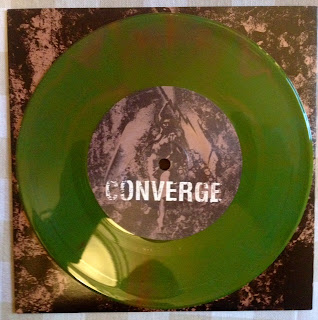 Again as per last year Converge give us a 'Bong' vinyl colour, which I think basically means they've thrown a load of colours into a big pot and every record looks slightly different. This is green with some slight red in the mix. 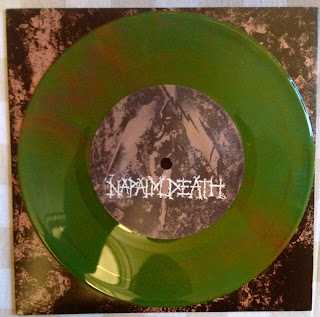 Of course I couldn't just buy one 7" all the way from the U.S so I needed to add something else to my shopping cart. The slip mat on my turntable was pretty boring so i decided to spruce things up a little with this: 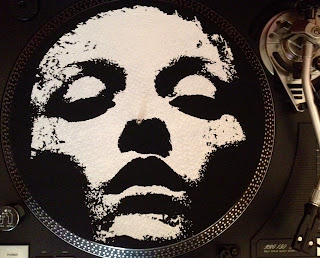 I just bought it on a whim really but I'm actually quite pleased with it.
Posted by J@screamingforrecords at 13:59