Expires 'Pendulum Swings' was one of my favourite records of 2012 and one of my most played hardcore records of recent times too. Such a great record. So when the follow up 'Pretty Low' was announced, I approached it with the usual apprehension given to any bands follow up effort. Especially when they've blown up a bit like Expire (deserved) have.
Expire - Pretty Low 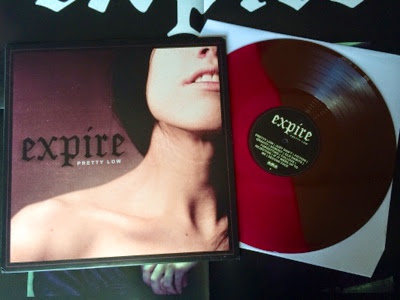 I needn't have worried. From the opening monster riff that brings in the opening album titled track it's clear Expire are back and have produced another banger!! If anything this record seems harder and vocalist Josh sounds more pissed off than he did on the bands debut! Awesome!! 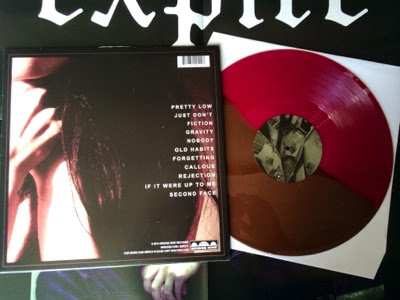 I like that this follow up record has a similar feel layout and cover wise to Pendulum Swings too without completely aping it. Nice touch. I got the half Brown / half Purple version of the record out of 700. Works well with the cover I think. 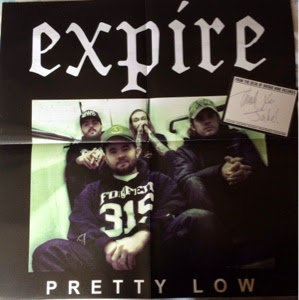 The lyric insert is backed by this huge Expire poster and as usual it's great that Bridge Nine took the time to add a quick note of thanks and lob in the usual free CD! Great work by all involved.
Posted by J@screamingforrecords at 04:37 1 comment:

The Admirals back and he's ready to rock. I like to think of Admiral Sir Cloudesley Shovell as a person, the big bird headed thing on the album covers actually. I heard the debut LP a year or so ago whilst in the midst of a big 70's hard rock phase here and it was glorious. So I was pretty pleased when a follow up was quickly announced by Rise Above.
Admiral Sir Cloudesley Shovell - Check 'em, Before You Wreck 'em 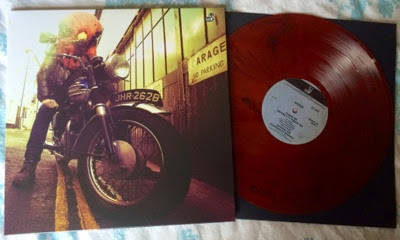 This record definately see's the Admiral in second album territory. It's less instant and formulaic than the first record with the band experimenting a bit more. Not that it's any less rocking if course. The band still deliver the goods in fine fashion. 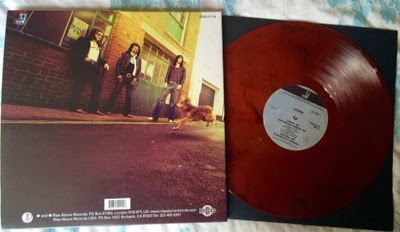 As always with Rise Above there's a wealth of vinyl options and 'die hard' editions to be had but I settled here for a Red / Black Marbled version of 400 copies. It looks really good actually. As does the gatefold packaging in general. 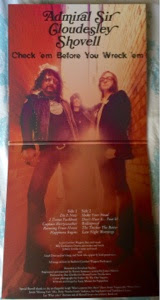 I almost heard about this release too late. I was on a message board one day when I noticed a post about a Give live record and it was a couple of weeks old. Shit!
Give - I Am Live 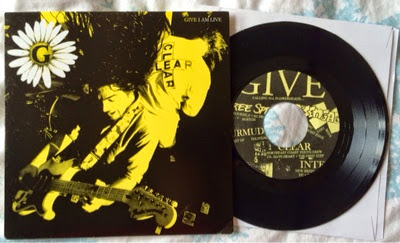 Of course by the time I rocked up I'd missed the yellow vinyl version out of 200 of this record and had to make do with one of the few remaining black versions again out of 200. There's another 100 on black with two limited covers for RSD 14. 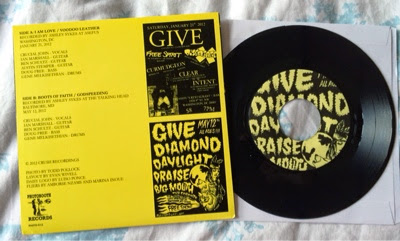 I dig that all Give 7" records look the same in terms of layout and this one carries on the trend well. I also love the flyers on the back that have also been used for the centre labels. Nice little touch.
Posted by J@screamingforrecords at 04:26 No comments:

Email ThisBlogThis!Share to TwitterShare to FacebookShare to Pinterest
Labels: Give, Photobooth Records

Powered Records recently did the decent thing for us idiots that had missed out on Caught In A Crowds first 7" 'You've Lost' and pressed it together with the bands second release 'The Fight' on one slab of 12" wax.
Caught In A Crowd - Still Holding On 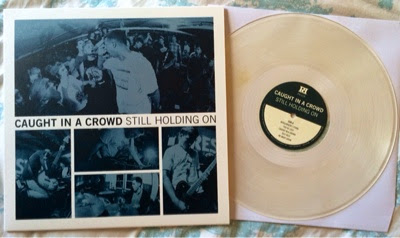 With it's sleek and clean design this looks really good. Powered have done a good job. I got the Clear version of the record. As they are now sold out leaving only Blue left I presume Clear was the most limited but I can't remember if any numbers were published. 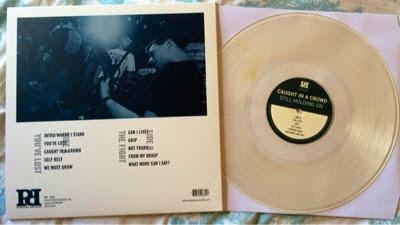 The record also came with a copy of Powered Fanzine number 5 which is a tidy little read featuring Caught in a Crowd, Dag Nasty, React! Records and a little piece on some dudes explaining why shirts are better than records - the fools!!
It's personalised too which is nice. 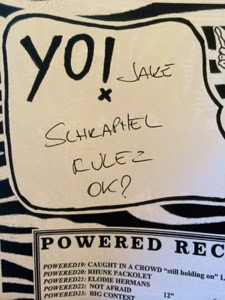 I also picked up some Justice sunglasses in the same order. I'm the smoothest pimp daddy when the sun shines now!! 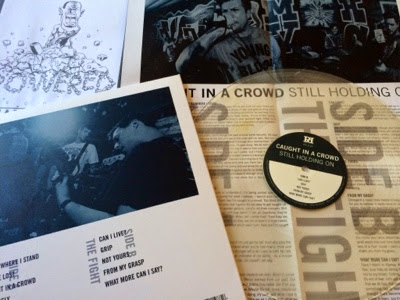 Posted by J@screamingforrecords at 02:11 2 comments:

Email ThisBlogThis!Share to TwitterShare to FacebookShare to Pinterest
Labels: Caught In A Crowd, Powered Records

I can't believe I'm only just posting this up here, I've had it for ages. There's not many bands I collect all pressings of, but when Reaper Records announced another (3rd) pressing of Backtracks Darker Half I couldn't resist.
Backtrack - Darker Half 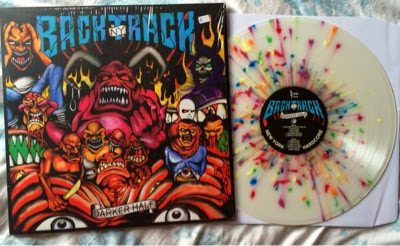 I've said it loads of times that this is a fantastic record, so more copies the merrier as far as I'm concerned. I've gotta say though I was kinda dissapointed with this 3rd press. Reaper made it look like the cover would again slightly change for this pressing like the two previous and the 'Backtrack' on the front would be in purple this time. It isn't, it's blue just like the 2nd press. I don't know why it's pictured as being purple on their website. Strange one. 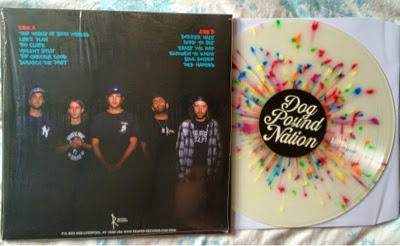 Also and I know these things are kinda random but the 'Rainbow Swirl' press looks far better on the website than it does here. I think my copy looks kinda lame. Ah well, it's still good to have another copy of this record either way. This Rainbow Swirl version is out of 800 copies. Luckily for my pocket there still seems to be plenty left so I can't imagine a 4th press arriving anytime soon.
Posted by J@screamingforrecords at 08:40 4 comments:

What Time Is It?? 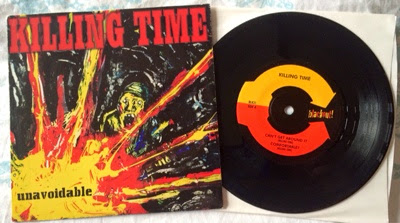 Classic stuff. Classic 90's NYHC. Another record I picked up off eBay a little while ago. I hadn't listened to Killing Time for years before getting this but I had a lot of fun spinning this 7". Kinda makes me want the yellow vinyl version now. 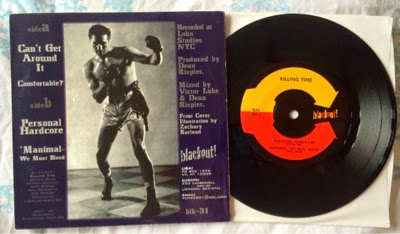 Posted by J@screamingforrecords at 16:00 No comments:

Coalesce are one of those bands that I love but I rarely actually listen to them. I may have even said this before. Whenever I buy something by them and listen to it though, I remember how good they are and kick myself for not listening to them more.
Coalesce - A Safe Place 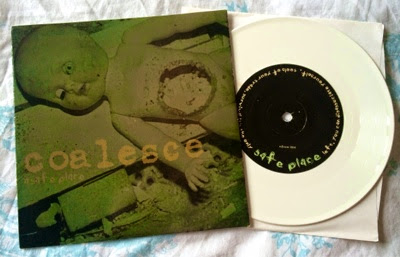 I picked this up off eBay a short while ago for pennies. Which is always fine by me. My Coalesce collection should be bigger really, I might put some effort into making it so soon. Featuring two great slabs of heaviness this is a good 7". Coalesce were really at the top of their game around this time. 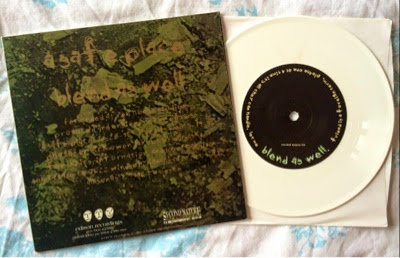 This is the white second press of the record out of 300.
Posted by J@screamingforrecords at 02:38 No comments:

Email ThisBlogThis!Share to TwitterShare to FacebookShare to Pinterest
Labels: coalesce

There's a few labels doing good things at the moment, Straight & Alert is one of them. These two releases have been sat on my blog pile for quite a while now and just as you'd expect from this label, they both totally rip.
Dog Chains - Give/Take EP 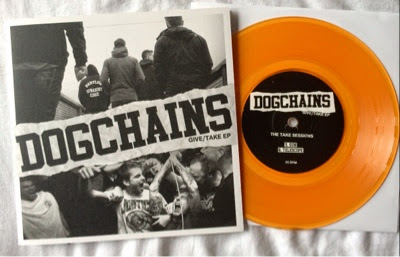 First up Germany's Dogchains. This band have a Lockin' Out vibe going on with a nod to the old school too. Really good stuff. 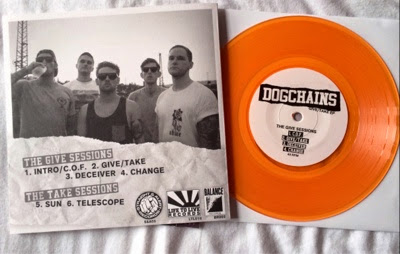 This is the Orange version if the record limited to 288 copies. Whilst I was at it though I also picked up the pre-order version of the record. 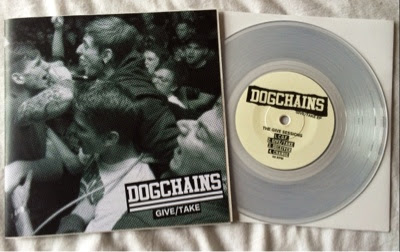 Different cover which is always nice and on clear vinyl limited to 208 copies. 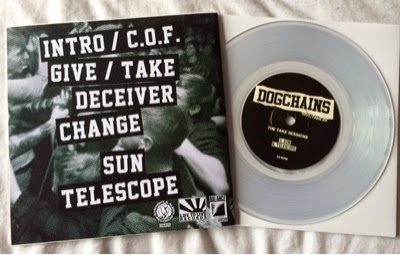 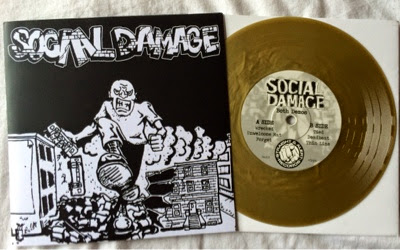 In a seperate order around the same time I also picked up this release of Social Damage's two demos pressed on to one 7" record. Fast and furious Judge meets Straight Ahead style stuff is the order of the day here. 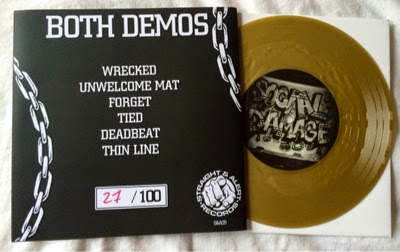 This is the gold vinyl version with an alternative Breakdown rip cover numbered out of 100.
Posted by J@screamingforrecords at 02:05 No comments:

Wild Stabs In The Dark

This one snuck up on me. I'd been waiting for The Flex to follow up their awesome Scum On The Run release eagerly, and then all of a sudden one day I checked the labels website and it was there.
The Flex - Wild Stabs In The Dark 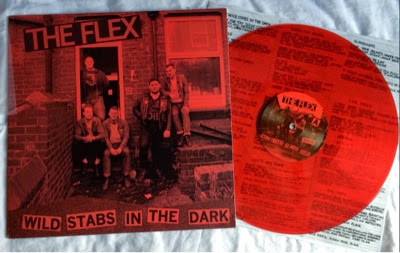 Keeping the theme of the debut release going with the all red cover and record The Flex have not let up an inch and have  delivered another awesome slab of Leeds City Hardcore. Sorry, but as I've said, it's my hometown and these boys along with a few others are doing us proud at the minute and are at the forefront of this hard as fuck 80's Boston style stuff. 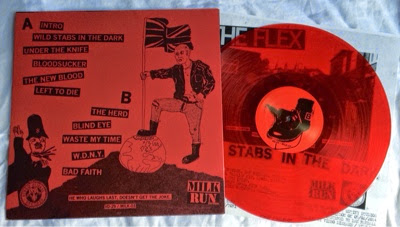 As far as I know all of the copies of this record are on this red vinyl of which I believe there were 1000 pressed. 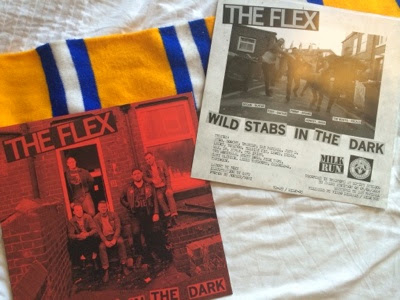 Had to take a picture with the Leeds scarf haha.
Posted by J@screamingforrecords at 13:33 4 comments:

Man, I hardly got in any posts last month. The records have still been coming in thick and fast too so as you can imagine I'm waaaay behind. I've changed jobs in the last few weeks and as you know that tends to knock your spare time and life in general out of whack etc. I'll get back on track at some point though. I picked this record up a while ago now... 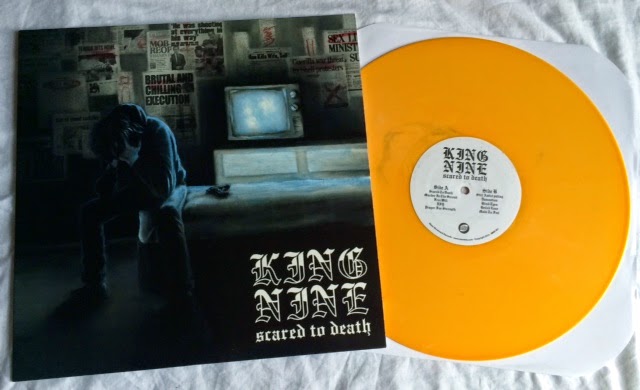 I'd heard King Nine before picking this record up on the Extermination Comp that Flatspot Records put out, honestly though, despite liking their track I'd forgotten all about them. I think the 'featuring ex-members of Backtrack' was enough to arouse my interest when I saw this in a distro though. Because of that I guess I kinda expected this to sound like Backtrack in some way, it doesn't. King Nine are a very different beast, they are far more traditionally New York Hardcore sounding and stripped down than Backtrack. Not that I mind, I'm a fan of that sound so this was a nice surprise for me. There's some seriously monster bang your head riffs on display here. 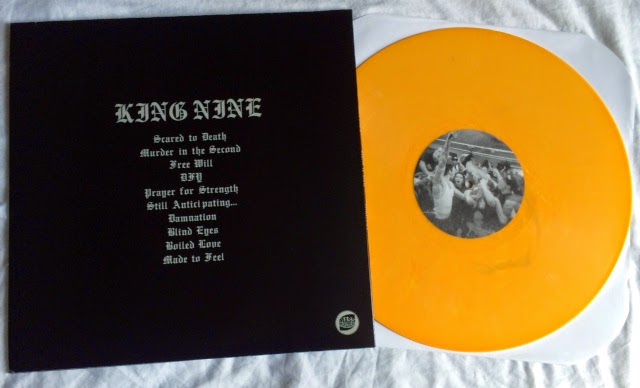 I believe this is the second press of the record and the yellow version of 300 copies.