Casualty Of The Core 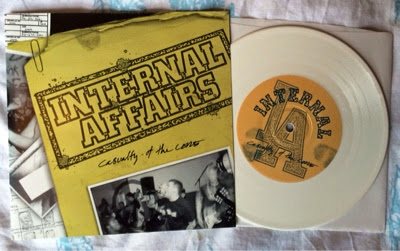 The Casualty Of The Core 7" was sat there with a few hours to go and I ended up scoring it for 99p. I love cheeky little wins like this. You weren't nessacarily looking for a record but for 99p you have no hesitation in adding it to your collection! 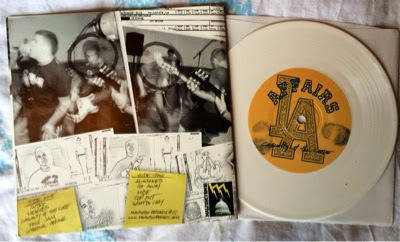 This is the White version of the record which apparently was out of 300. 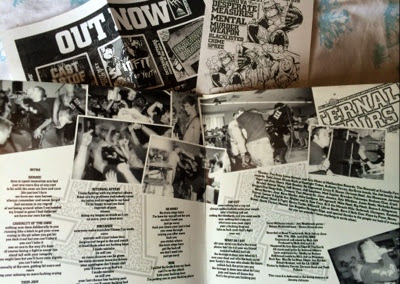 Posted by J@screamingforrecords at 02:36 No comments:

On the rare occasion in England that the sun rears it's head, Rancid are pretty much still after all these years my go to band. Especially if I'm driving anywhere -get the windows down, shades on, arm out the window, yes I'm rolling!!!*
Rancid - Hooligans 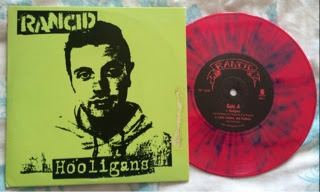 I picked this Hooligans 7" up a while ago now, I wasn't actively looking for it, it just caught my eye. I guess the reason for this is that I've looked at it a couple of times in the past and for some reason it seems to go for quite a lot of coin, not fortunes but certainly more than I want to pay for a Rancid 7", but this didn't have long to go and still didn't have a bid. In the end I scored it for a few pounds. 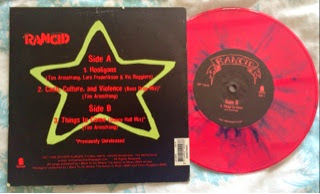 Hooligans is taken from Rancid's Life Won't Wait record of course, the tricky follow up to ...And Out Come The Wolves. Most people kinda pan or dismiss the record but I can hang with it no problems. I think it was always going to be the most natural move for a band so heavily influenced by The Clash. Pink with Purple splatter vinyl.
*Obviously I have to imagine I'm in some sort of cool pimped out low rider, rather than the two boring family cars I actually own.
Posted by J@screamingforrecords at 09:05 1 comment:

Sometimes you don't need to hear a record to know it's gonna be right up your street. When I heard about this record being released by Cave In's Stephen Brodsky and Converge's Ben Koller, I knew it would be so far up my street it would be practically smashing down my front door and taking a welcome place on the couch. 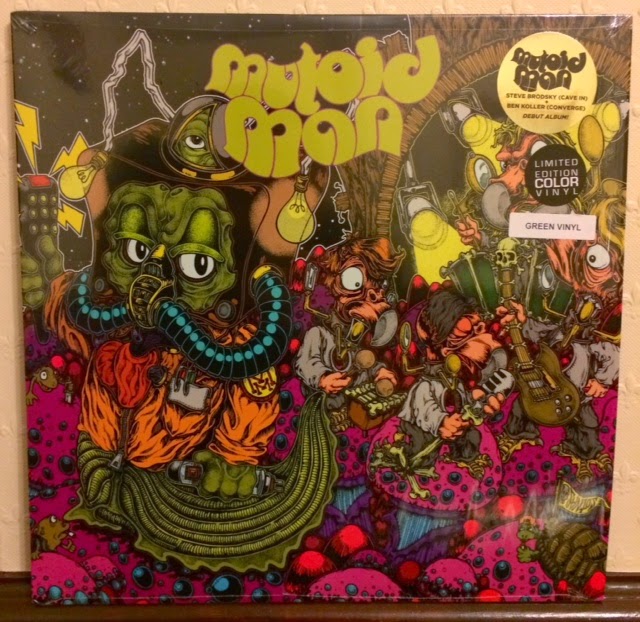 I've had this a while now and I like this record a lot. Given the guys involved you'd be forgiven for thinking this might sound like one of their full time bands or maybe some sort of mish-mash of the two? It doesn't, Mutoid Man serves up distorted, driving, prog-rock with some seriously catchy hooks. It actually took me awhile to track down this record and in the end I had to get it as part of my big rev order a month or so ago. Typically a few days later the exact same copy turned up in my local record store...what are the chances. 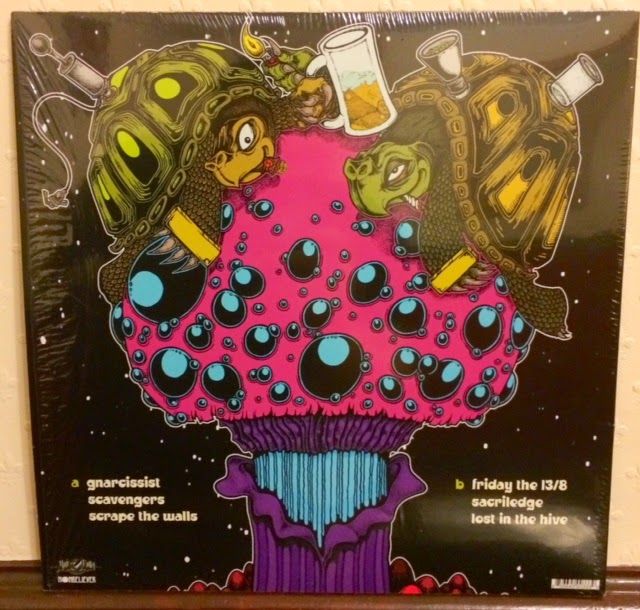 I like the artwork on display here too. It's kinda 'out there' but I think it suits the music pretty well. I picked up the Green version of the record, no idea of pressing numbers but it was also released on Red, Purple and Clear. 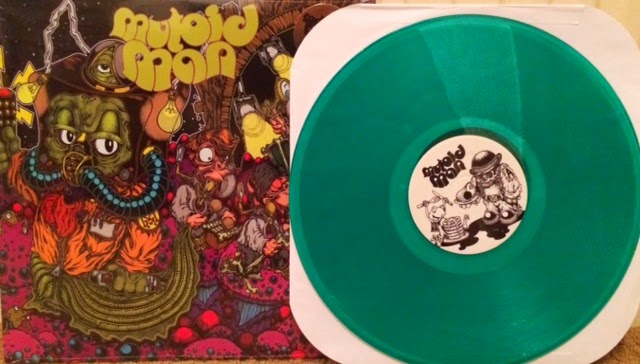 Posted by J@screamingforrecords at 14:25 No comments:

I've had this for what seems like months now, so it feels a bit odd that I'm only just getting round to post it up here.

Winds Of Change - A Hardcore Compilation 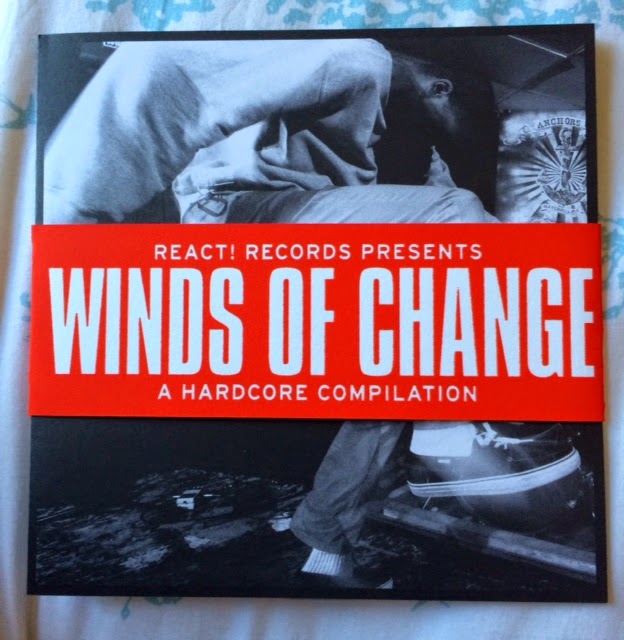 Compilations are a tradition in hardcore music and once upon a time served a brilliant purpose of exposing us to new bands pre-internet. Sometimes they work and sometimes they don't as a listening experience. Whilst that purpose is not so important now a quality compilation with exclusive tracks is still a wonderful thing, especially when it's put together as well as this one from React! Records. 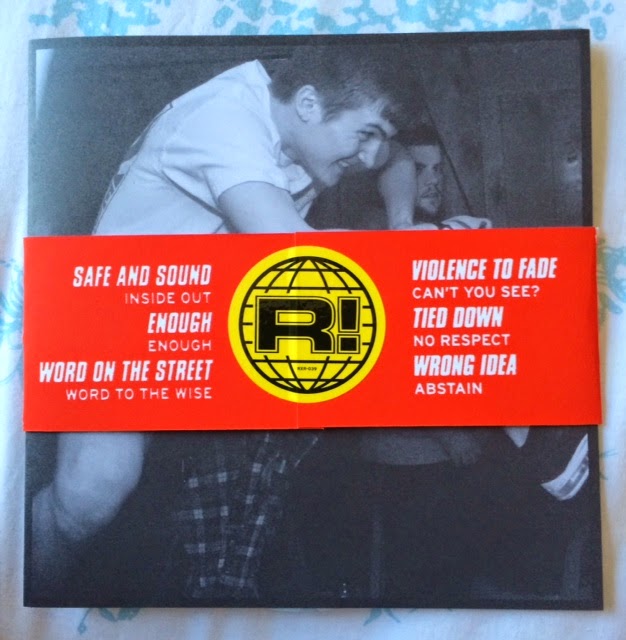 Sometimes on these compilations you get the odd clunker track, but not so here, all six bands on show bring their A game to the table and there isn't a duff track to be had. I'd really only heard Enough and Wrong Idea previously but Violence To Fade especially really impress me with their effort here. 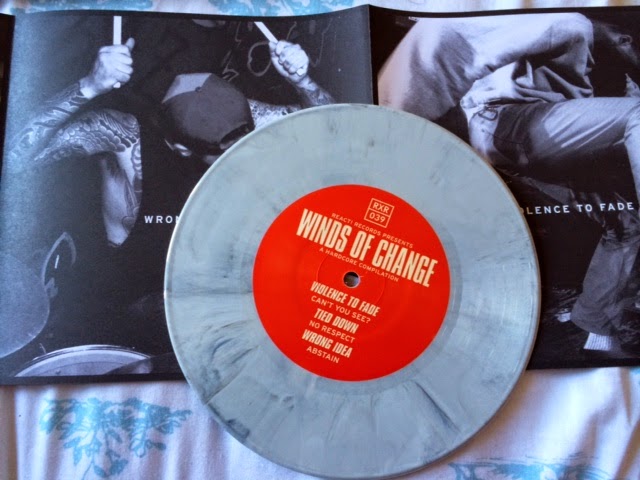 Worth a big mention here also is how this thing looks. The inlay consists of interchangeable sleeves so you can put your favourite of the bands as the cover should you wish. Set against the red obi style strip keeping it all together it looks great and feels like you are holding something substantial. I picked up the 'Smoke' version of the record limited to 150. 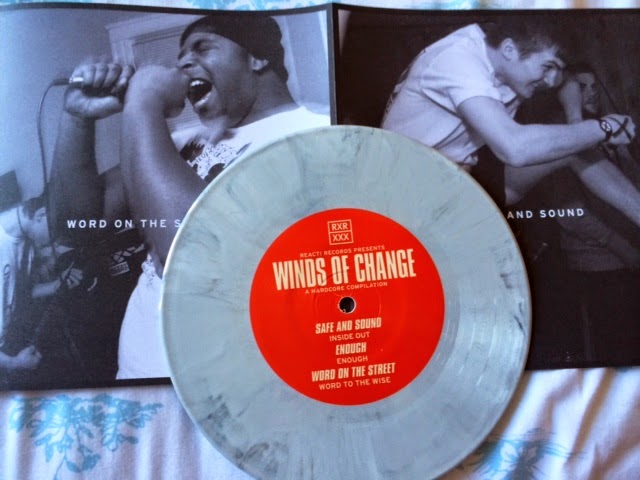 Email ThisBlogThis!Share to TwitterShare to FacebookShare to Pinterest
Labels: Enough, React Records, Safe And Sound, Tied Down, Violence To Fade, Word On The Street, Wrong Idea

Last May I wrote about Break Away and their For Life release. Here's the United Blood version of the record. 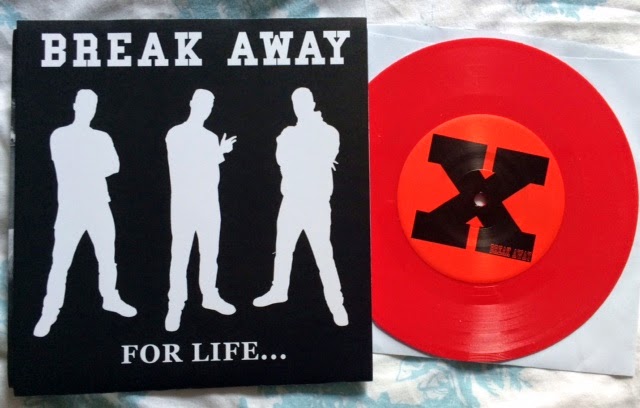 I don't usually tend to find out about stuff like this when it's too late but I guess the stars aligned one day recently when I read on line somewhere that Break Away had a few of these left and up for sale in their Big Cartel store, I headed straight over and was lucky enough to score. This is on red which is sweet as my previous copy was on clear vinyl. Number 13 of 25. 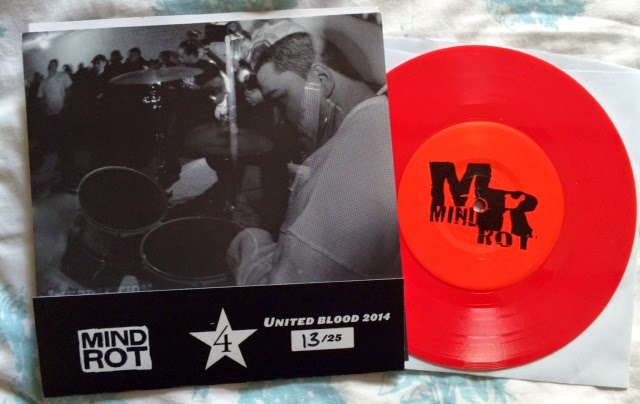 Email ThisBlogThis!Share to TwitterShare to FacebookShare to Pinterest
Labels: Break Away

As I always say, I have a load of stuff to blog about. I'm gonna jump up the pile a bit though so that this post is at least semi current and also to take four records off the pile in one swoop.

So Record Store Day 2014 has come and gone and on the day in question I looked on in interest (via twitter etc) at the queues outside record stores near me, some fools were queueing from the evening previous. MADNESS!! Me? I stayed in bed, there was only a couple of things I wanted and I just couldn't be bothered with it for the second year running. What I did was wait until the following week like I had done a year previous feeling pretty damn confident that at least two of the three things I had any interest in would still be sat on the shelf waiting for me. And what do you know...

Battery - What Ever It Takes 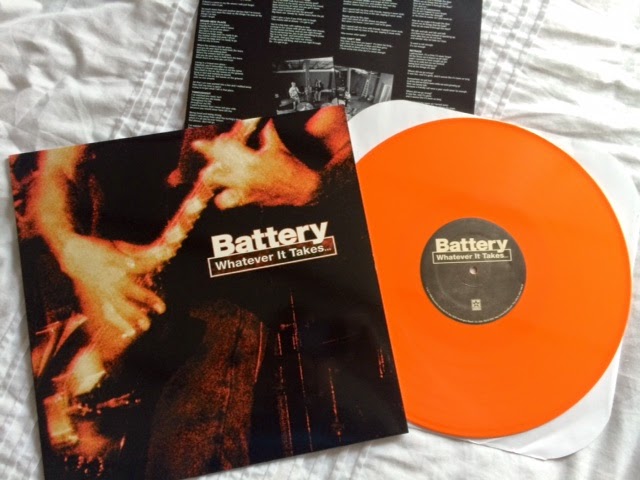 This was my main want so I was pleased to grab it off the shelf, a repress of Battery What Ever It Takes. This is a good pressing of the record too, I remember having a copy of this before years ago and it didn't sound brilliant. This on the other hand must have been remastered etc because it sounds great. Orange vinyl limited to 700 copies. 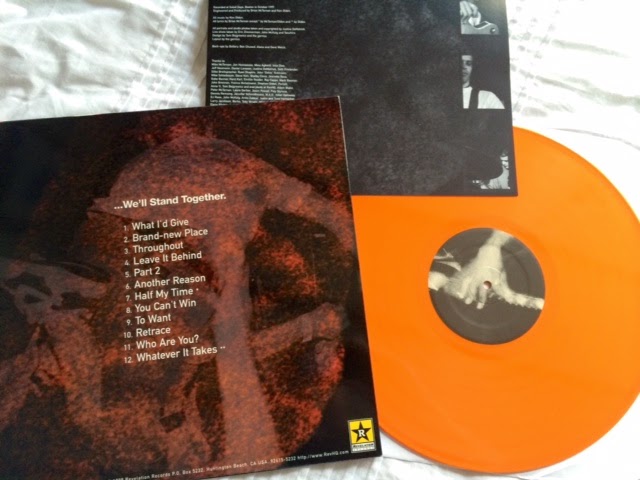 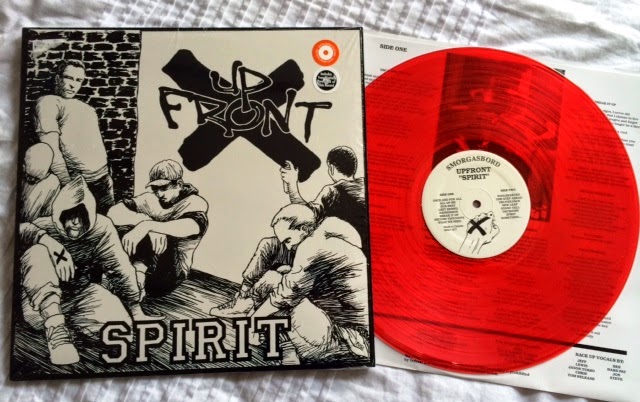 Released originally in 1988 and never having owned a copy previously I was stoked when I heard that Spirit by Up Front was getting the reissue treatment from Smorgasbord Records. I wasn't sure if the shop would actually have this but there it was on the shelf. On paying the guy at the counter said they'd only got one copy of this in and he couldn't believe no one had picked it up on Record Store day. He said it with a shake of the head and we exchanged a knowing look. Great record. 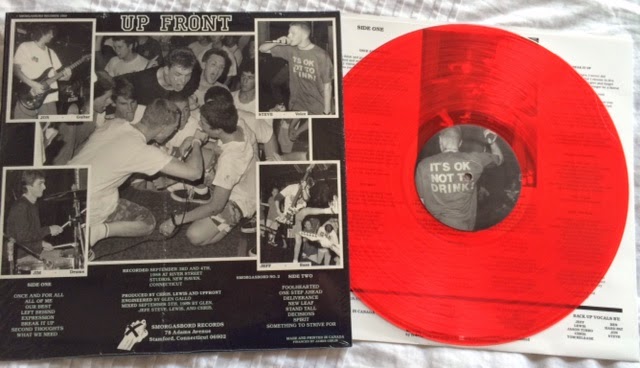 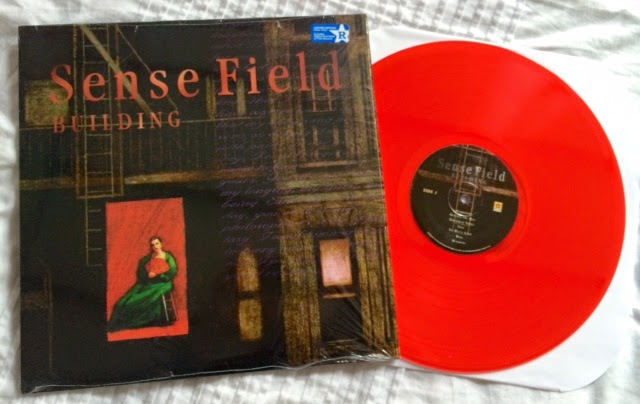 I actually wasn't as bothered about this record as the other two and figured it would probably be my make do record for the lack of Up Front. However, it being there with the others I couldn't help but pick it up too. Not that it's not a fine record, I remember a friend playing this to me back in '95 and me not liking it much at first, but slowly I dug it. I just wasn't excited about it. I am pleased to have picked it up though. 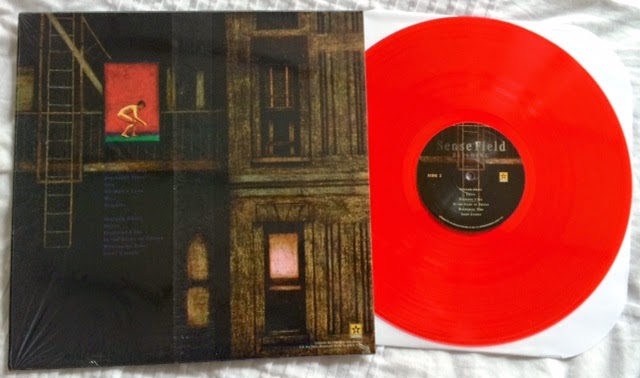 On leaving that store I ventured to a non Record Store Day store to see if they had anything worth picking up (the change was burning a hole in my pocket).
Pantera - Far Beyond Driven 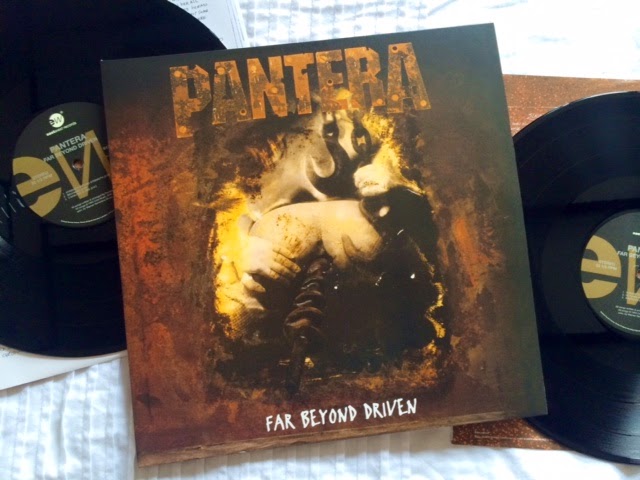 I was feeling metal (pronounced Mettttaaaaaalllllll) so it was no surprise that this reissue of Pantera Far Beyond Driven caught my eye. Look at that rather unsavoury originally banned cover. This is on double vinyl and sounds great. I always liked this record, it's not as immediate or anthem filled as Vulgar Display and probably not as angry or forward thinking as Great Southern Trendkill but over the years it grew on me a lot. I once watched a stripper strip to 5 Minutes Alone too so that song has new memory's attached to it now haha. The gatefold features the more well known version of the album cover. 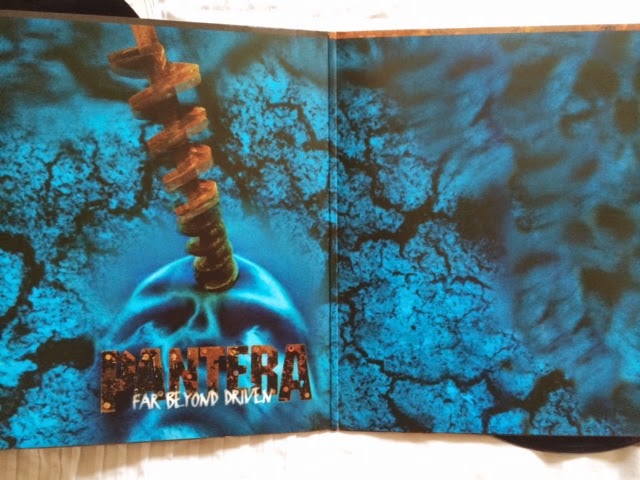 So, Record Store Day, once again I've picked up what I wanted without having to get up at stupid o'clock. Seems to me that unless you're after Bowie reissues or One Direction 7"s (really???) then you can just cruise up to your local store as normal and pick up the RSD releases at your leisure. Which once again raises the question, who exactly is getting in line on Record Store Day??
Posted by J@screamingforrecords at 04:34 1 comment: