Here's another record I've been sat on for quite a while now. Where does the time go? 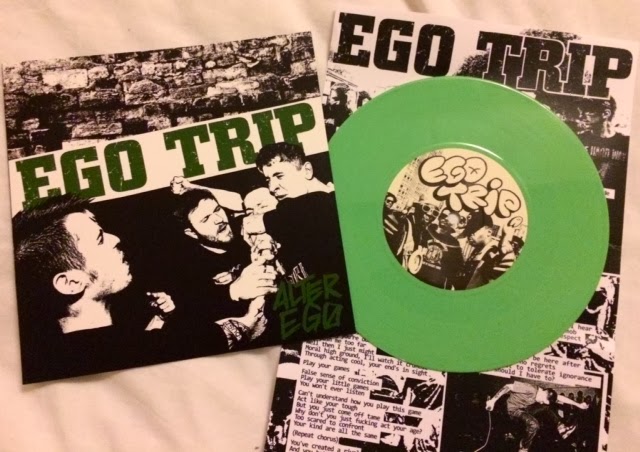 Carry The Weight Records are another label who just seem to get it right every time. This debut release from Ego Trip is another in a steady line of great releases from the label. Think early 2000's Lockin' Out style hardcore, with a whole lot of groove thrown in for good measure and your in the right ball park with these guys. 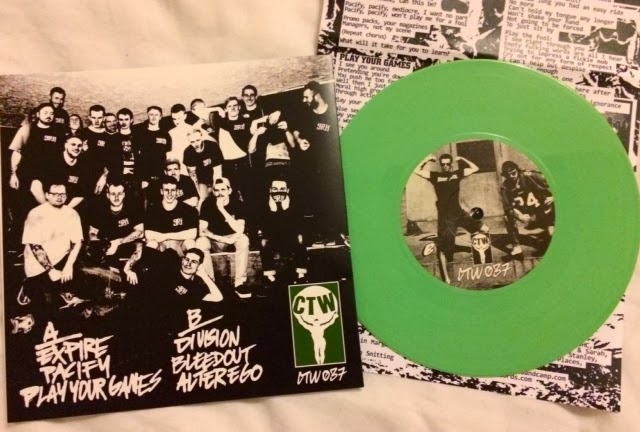 Good locking package as well from CTW what with the glorious group shot on the back and the colour theme throughout. This Green vinyl version is out of 200. The Black version is actually more limited and out of 100 but, well, you know...
Posted by J@screamingforrecords at 11:49 No comments:

My homies over at the UK's premier label for all things awesome in music Speedowax Records got involved with this years Youth Crew compilation. Sweet! 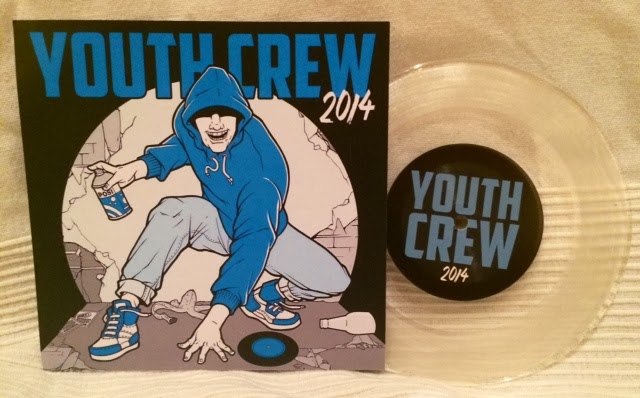 I've got a few of these compilations now from different years and they are always excellent. This years is no exception at all with bands like Clean Break and Clearsight weighing in with fine efforts. This is the clear vinyl version of the record out of 125. Whilst this years version keeps up the theme of the record covers, I like this years more than the last few years as it's slightly less cartoony. 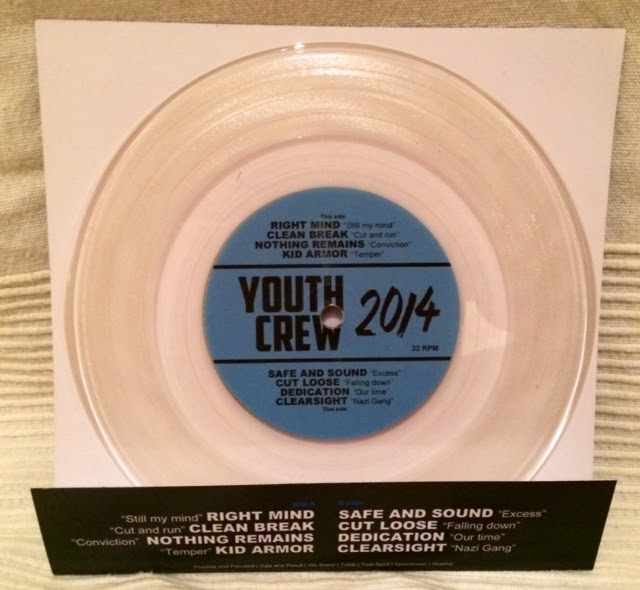 Whilst I'm at it I also picked this up a few weeks ago for next to nothing and it seems an ideal time to post it up. 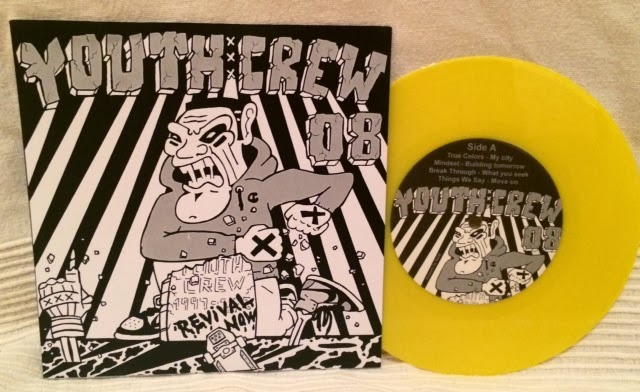 I didn't have this one (the first in the series) and I scored it for like 99p. What's not to love? Especially as '08 features Mindset, True Colors and Times Together amongst the contributing bands. This is the yellow vinyl version out of 250. 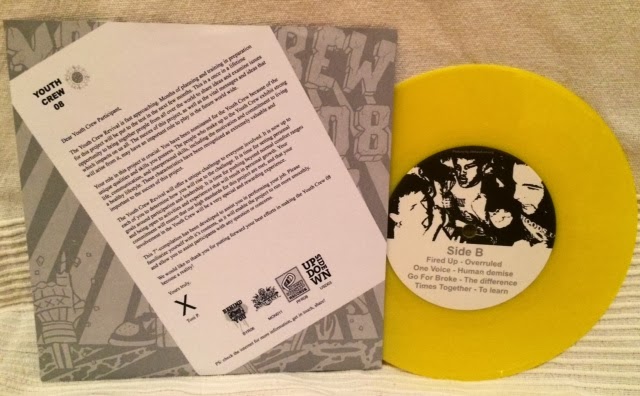 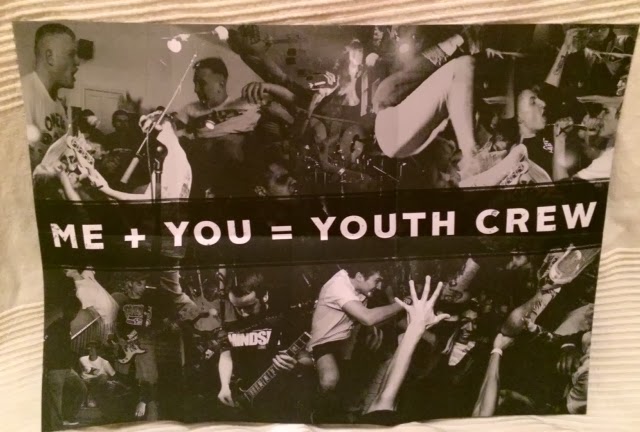 Posted by J@screamingforrecords at 14:57 2 comments:

Caught In A Crowd

I've been sat on this for a while now, in fact I have a pile of 7" records that is getting bigger and bigger. I need to make a serious blogging dent in it ASAP. Anyway React Records smash it again!

Caught In A Crowd - The Fight 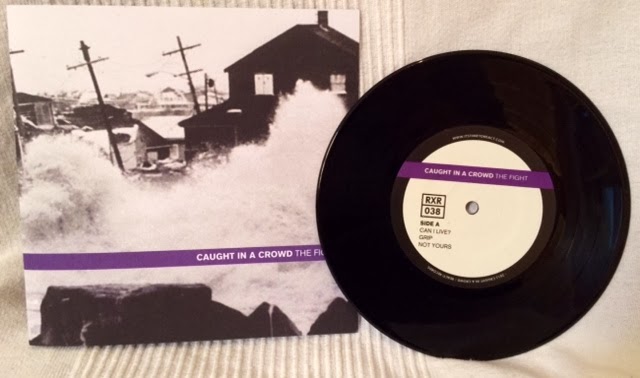 I wanted a piece of this record as soon as it came out after hearing it but I just couldn't be bothered to order it from the states at the time. I think it's because I'd missed out on the first 7" from the band despite being told by at least 3 people to jump on it. So I just waited till one turned up in a UK distro and finally it did right at the beginning of the new year. Obviously it means I only got a black version out of 400 but that's OK. Mike's got a nice little collection of the record here if your interested in the other colours. Great Straight-Edge record! The sleeve and record look nice and sleek and classic too. 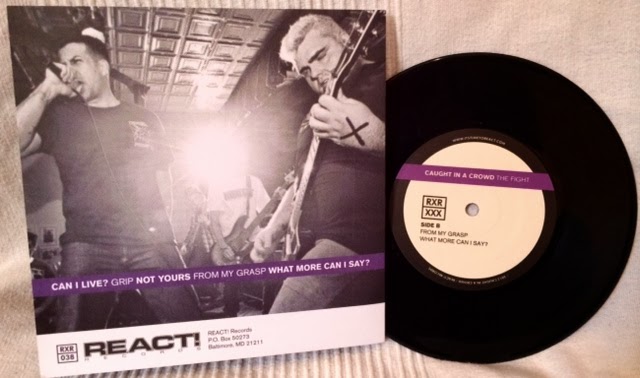 Email ThisBlogThis!Share to TwitterShare to FacebookShare to Pinterest
Labels: Caught In A Crowd, React Records

I love Converge but it's taken me bloody ages to pick this up...

Converge - On My Shield 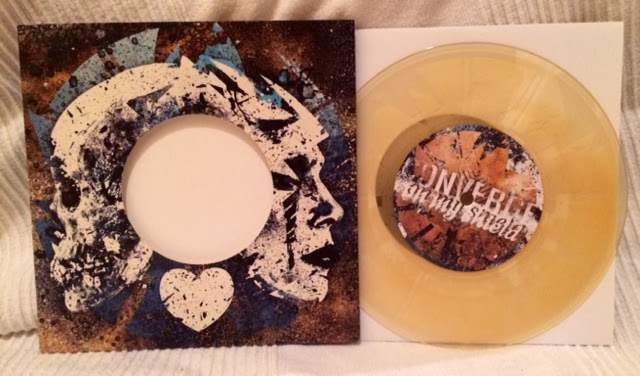 I don't know why it's taken so long to pick up, I guess at the end of the day it's just a release I knew that I could live without until one just kinda fell into my lap. This is the Milky Clear & Beer transparent vinyl Tour version of 1000. It's single sided with just the one song and the B-side is etched. 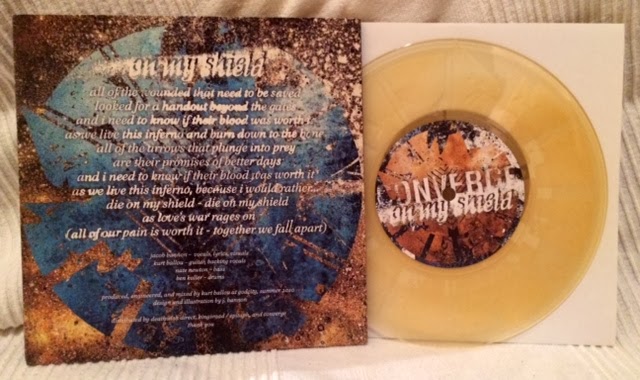 You may recall back in December I wrote about the Can't Escape single from Backtrack that was acting as a taster for their new LP that would be to follow in January. If you bought both colours of the 7" then you would be able to pre-order the new LP earlier than most, thus allowing you to pick up the most rare variant. Such was the demand though I still missed out on the Clear w/Circle Swatches of 300! Bummer! 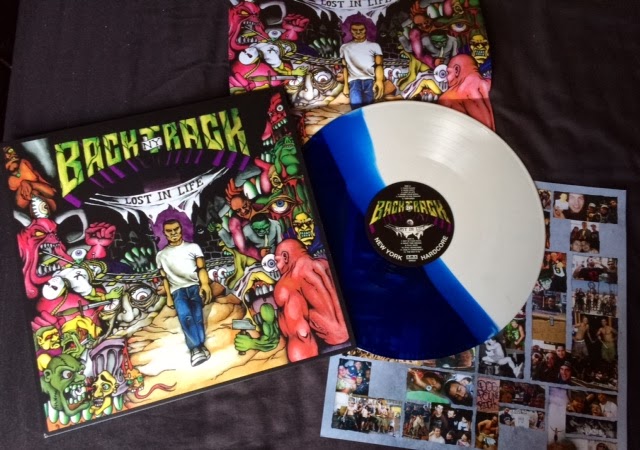 What I ended up with was the Half White / Half Blue version of 700. This still looks awesome so I'm certainly not too unhappy. The first press also saw a Olive Green press of 1000 which oddly seems to have sold out before the half and half version. I remember this happening with the Expire release on Bridge Nine too, I suspect it's because the Olive Green is the version the distros got? 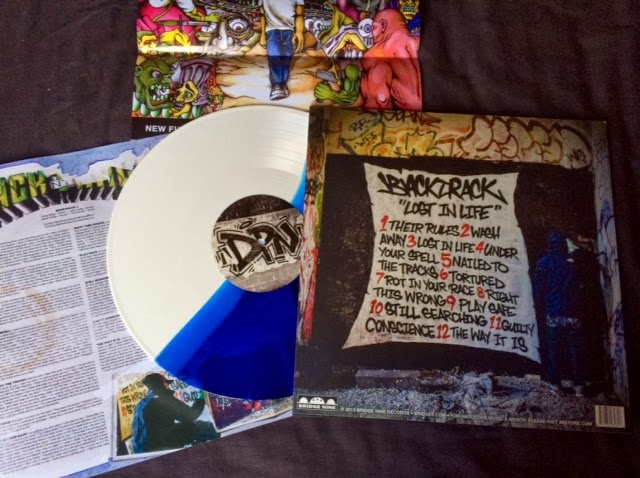 The artwork once again comes from Spoiler and carries on the same theme as the first record Darker Half. I have to admit to being slightly torn on it. Most I know love the continuation, but for me it's just a tad too similar to Darker Half. I know that's the point of course but I dunno, on it's own it looks great but I think I'd just have liked to see it look a bit different. 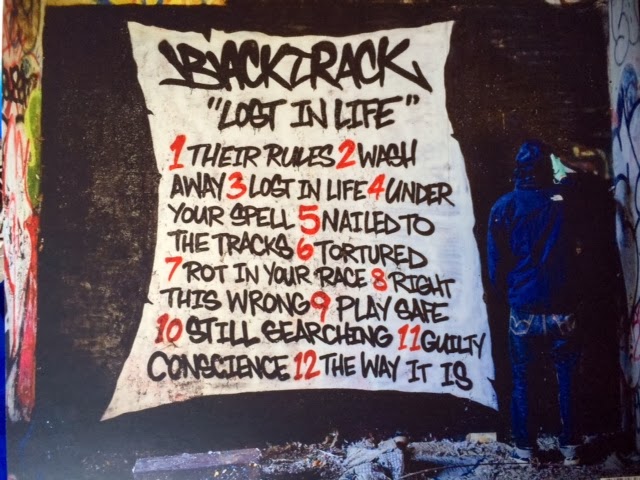 I do love how the song titles have been done on the back though as a graffiti piece. Looks really cool. And what of the music? Well it's more of the same from Backtrack that made Darker Half such a favourite of mine and they've probably even managed to ramp it up a notch on this record. Time will tell as I'm not as familiar with this record yet but it might even be better than their debut it's that good. In fact to echo Mario January could have already seen my record of 2014. 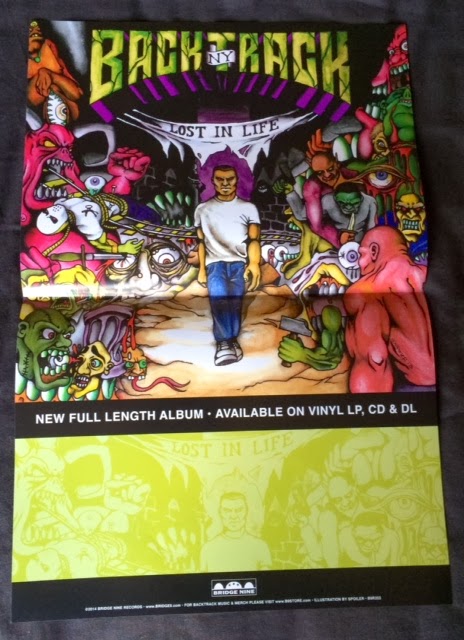 Mine also came with this poster which was a nice addition. There's also already a second press of this just dropped on a great looking Green in Highlighter Yellow (basically it's bright as fuck!) of 1000, which I'll probably pick up. It's a shame they haven't changed some of the colours on the front though like they did with the Darker Half different presses. Anyway, Backtrack have set the Gauntlet with this one, will it be bettered this year?
Posted by J@screamingforrecords at 04:49 4 comments:

One of my favourite metal records ever recently got the repress treatment courtesy of Earache Records and their FDR series. 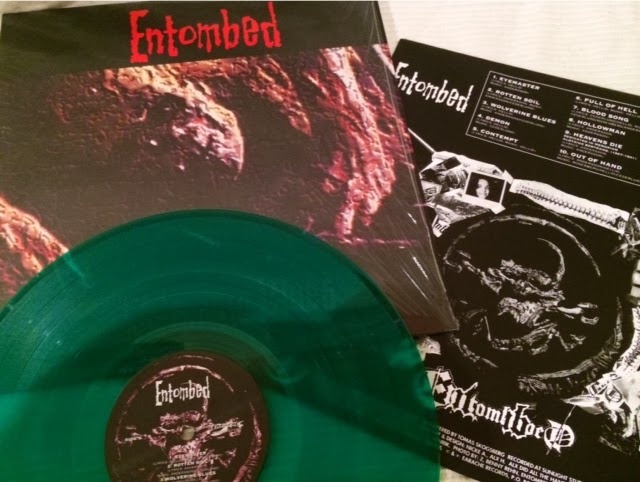 When this record came out in 1993 I remember pretty much everyone I knew that was even remotely into alternative music was digging on this record. It's hard to remember back to how this sounded to peoples ears back then, but it was so different to the usual metal sound it transcended a few different genres, it sounded modern and unlike most things that had come before it with it's rock n roll swagger and bluesy groove. I think this record was as influential as Sepultura's Chaos Ad that came out in the same year but gets far less credit. Listening to it again today this still stomps!! 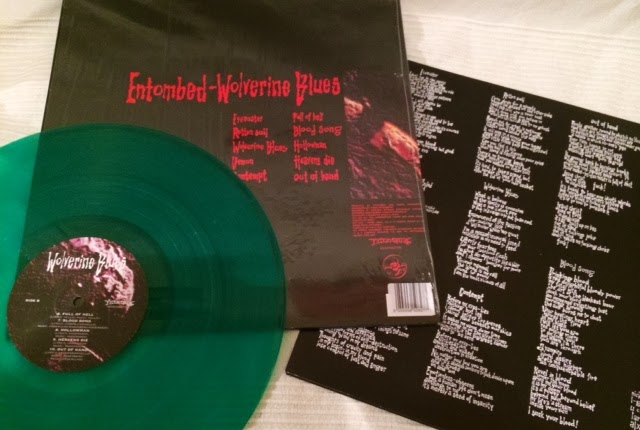 This is the Green version of the record which I think is exclusive to Amazon and limited to 200. For years I had this record on a copied tape and it seems my mate that recorded it for me had done his own mix, so for years I thought the record kicked off with Out Of Hand before going into Wolverine Blues, when I bought the CD years later I was surprised not to hear the 'I am Jesus Christ...' at the beginning of the record. I don't think that could happen in 2014.
I still think he was on to something with that track listing too!
Posted by J@screamingforrecords at 12:52 No comments:

Represses are always a bone of contention on the most part. Usually I don't get sucked into collecting them all unless it's a record I really like and goddamn I like this record. 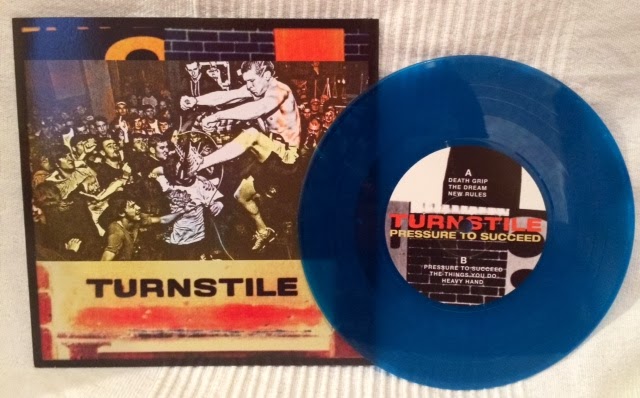 In this instance at least Reaper Records went to the trouble of changing the covers and labels and not just the vinyl colour so it at least feels like I'm getting a completely different record. This is the Blue vinyl of the Pressure To Succeed repress (a different colour blue to the first press) of 300. 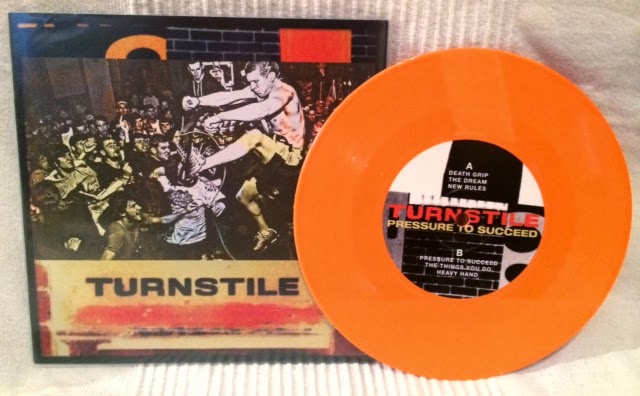 This is the Orange vinyl of 700. I'm not sure what I think about the new covers, I think I prefer the original blue ones although the pre-order cover is still my favourite. 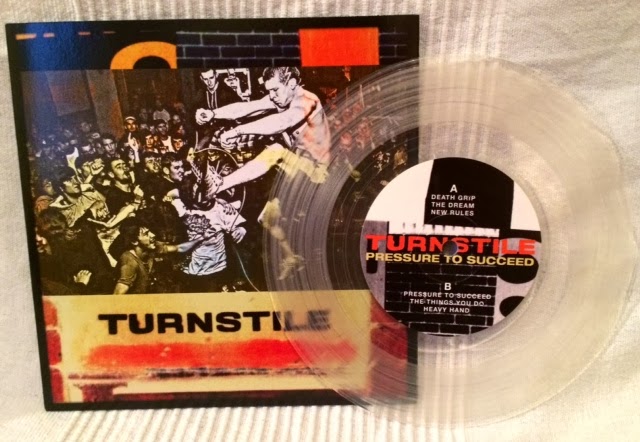 And the Clear vinyl of 1000. As mentioned, Reaper did change the centre labels as you can see, which is cool and gives the record a different feel visually. The back of the labels now has this picture. 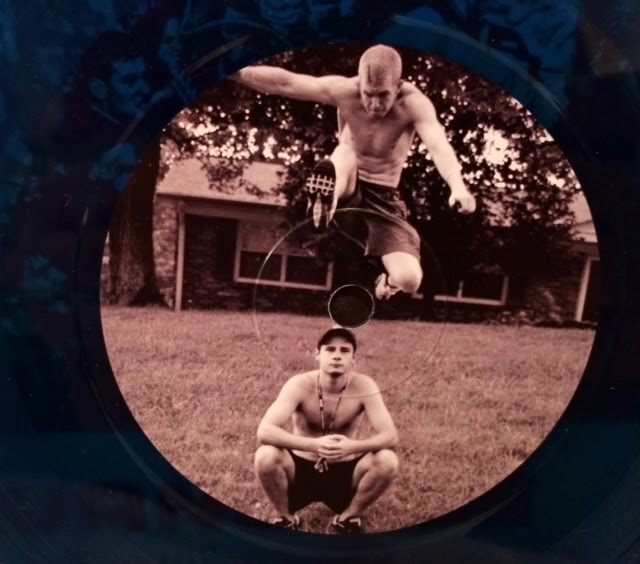 I'm just missing the test press still of this release after Tino helped me get hold of the release show cover version last year, but as there's only 10 I don't hold much hope of ever getting one. Anyway here's what a near complete collection looks like. That Green cover version is still the most limited of the regular release copies, although I have noticed the amount has changed a few times on the Reaper site, it did say 132 for a time which is I think more than it was originally quoted at and it's now changed to 200. Any ideas on that one Willem? 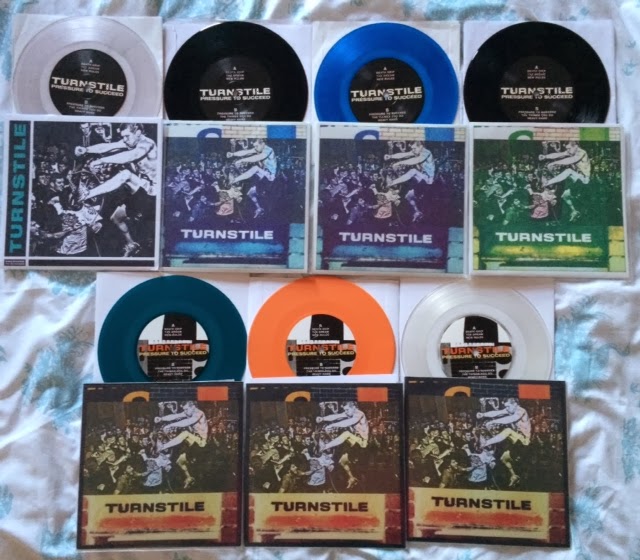 Posted by J@screamingforrecords at 11:52 8 comments:

A Test Of Survival

I wrote about Survival and their ace Spirit Unchained release at least three times in 2013, I was a big old fan of that 7" on Carry The Weight Records. So, when the chance came recently to add a test press to the regular copies I had I jumped on it. 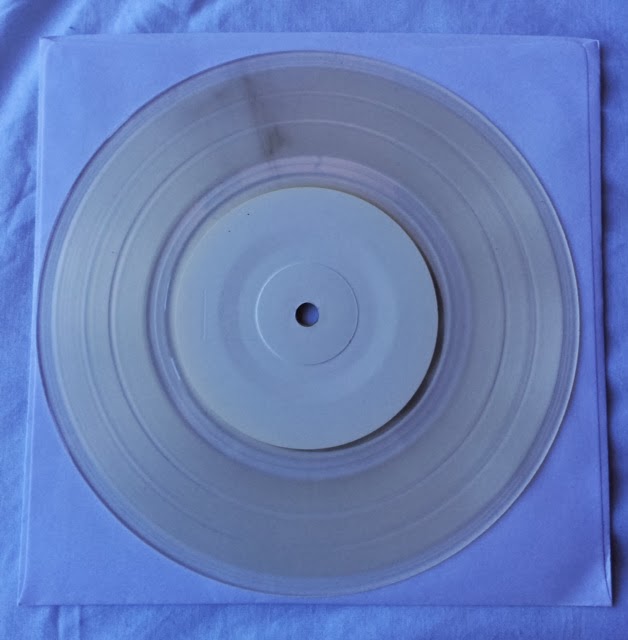 Here it is, there's not a huge amount to look at in truth. Clear vinyl with plain white labels. Inspired by Marcus I took a picture of it again with the regular cover just to make it look a bit more pleasing on the eye. 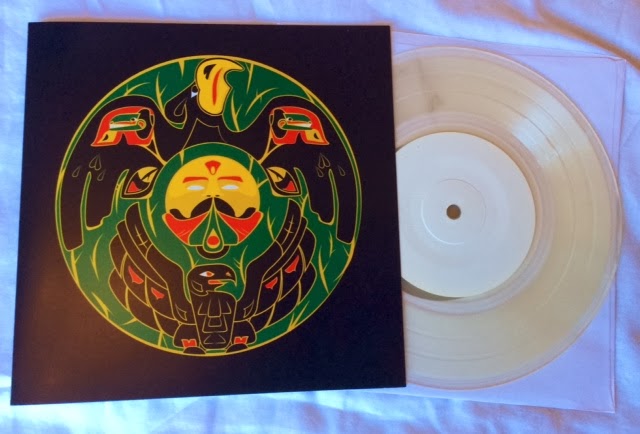 To round things off I took a picture of the test alongside the other copies I have of this record. First press on Red, Second press on Pink and Third press on Blue. I had zero desire to collect the other colours from the different pressings previously but suddenly I feel like I should try to pick them up. 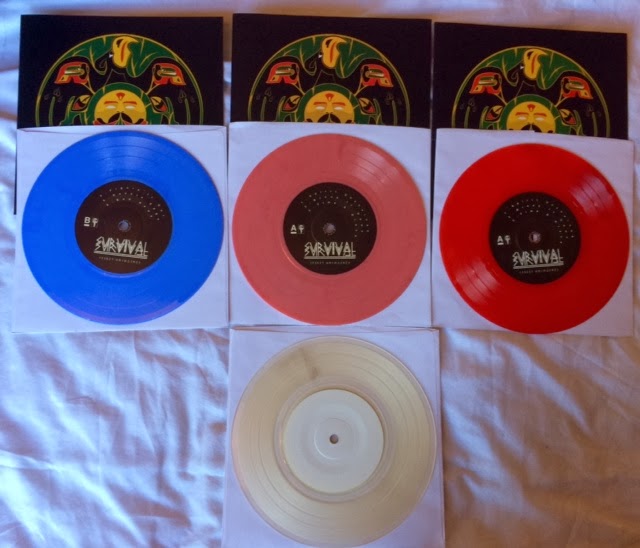 Posted by J@screamingforrecords at 03:08 No comments: