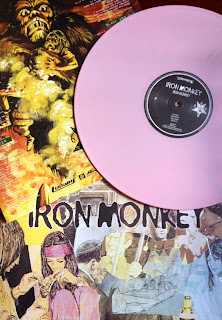 I had no idea this had been released on vinyl until I saw it posted up on the ever brilliant Couch Slouch blog.

As soon as I set eyes on it I raced over to Earache Records hoping to score one of the other less limited colour pressings as I assumed this version would have all gone. Did I overestimate how many people would be trying to get their grubby mitts on this? Is it because of the lack of hype for the release? I dunno but I saw straight away that they had the 'Shrimp Pink' limited to 100 pressing still for sale....score! 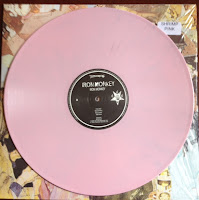 It's initially an odd choice of colour but I guess baring in mind Iron Monkey have a song called Shrimp Fist and that the same colour is used on the cover maybe not. I assume that's what Earache have tried to do here, match the colour pressings to the album cover. Stale Piss (yellow) 200, Iron (grey) 300 and Black. 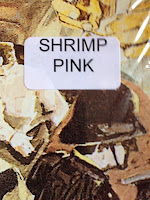 I'd not listened to this for a few years actually and I'd almost forgot how evil Johnny's vocals were and how totally unique the band sounded especially back in the late 90's. It even prompted a confused 'what IS this?' from my wife, which I always view as a bonus. They sound great here though, for what I think is the albums first outing on vinyl, and do a great job of transporting me back in time to when I first heard this in 97 or 98. Isn't it great when music can do that? There's a bonus track too as I don't believe Cornucopia was on the original release.
I'm not always a huge fan of this type of thing (with exceptions) but Iron Monkey always seemed to do the doom/sludge thing with a swagger and sense of humour/tongue in cheek that you couldn't help but get involved in. 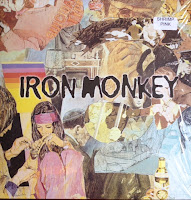 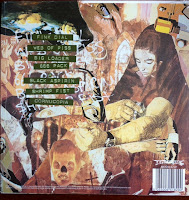 All label  proceeds go to the UK National Kidney Federation too which is a nice touch. Earache still have the other two colour variations left but the 'shrimp' has now gone it seems.
Posted by J@screamingforrecords at 03:53