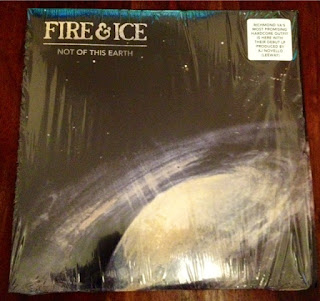 So it finally came yesterday, a little later than my stateside friends got this but hey dems the breaks, and I'm not really complaining as Reapers postage cost is reasonable and as quick as I think they can be. This is the debut full length from the much hyped Fire & Ice on Reaper Records entitled Not Of This Earth. It's kinda hard to believe that this is the bands debut as their name seems to have been everywhere over the last year or so. 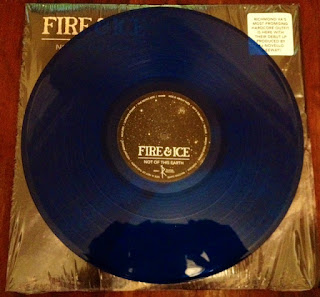 As you can see I opted for the blue version (which seems to catch the light loads) of this release, mainly because I thought it looked the best and seemed to go nicely with the graphic on the front of the album. It's not the rarest though, that honour goes to the black pressing of 300, but hell there's no way I'm taking black over colour vinyl, no sir, it just isn't as cool or as visually pleasing to me. There's also a white pressing of 1000. 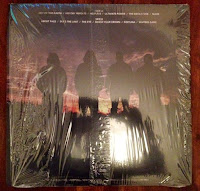 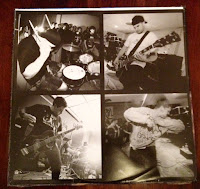 So I've only really had chance to give this a couple of spins so far and I like it. Is it deserving of the hype? probably not, I mean there's nothing earth shattering here and there are other bands (ironically on Reaper) that I think are similar and better, but when does the hype ever match the reality? very rarely. What we are looking at is a really fine first release of quality hardcore, that will certainly be getting a lot more spins on my decks, and as I've only had a couple of listens so far this might grow on me even more. 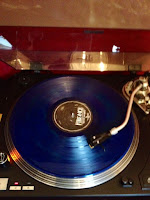 Picture included simply because I have a new turntable.
Posted by J@screamingforrecords at 13:21

Email ThisBlogThis!Share to TwitterShare to FacebookShare to Pinterest
Labels: Fire and Ice, Not of this earth