Nails are a band I've been meaning to check out for ages and I just kept forgetting about them. Granted I could have downloaded some songs at anytime or listened to them on their Facebook or something but what can I say? I like to check bands that I think I'm gonna really like out in good old vinyl format.
I'm so late to the party that Nails are on to their second full length record now. Ah well, if I have to arrive late then I can at least try and arrive in style right? 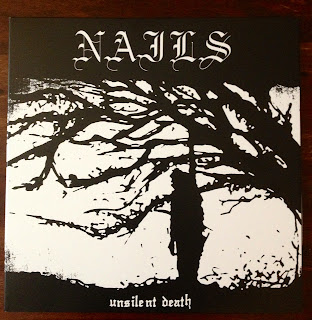 I got some rare alone time (for a dad of two) at the weekend and obviously used the time wisely to go hunt out some records. There wasn't a huge amount that caught my eye so when I saw this Nails record finally looking back at me I knew it was time to strike (I also bought a jazz record from the same store - bit of a weird mix). 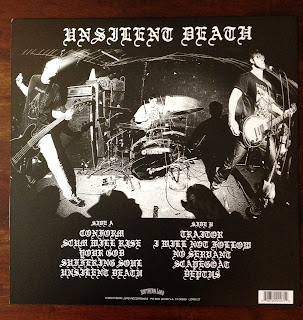 So this is the bands debut LP Unsilent Death and this is the Southern Lord reissue of the record. It's only on black vinyl but as it's heavyweight 180 gram vinyl and the black kinda goes with the look of the rest of the record I'm OK with that. Of course I'd have preferred a clear version but beggars can't be choosers. 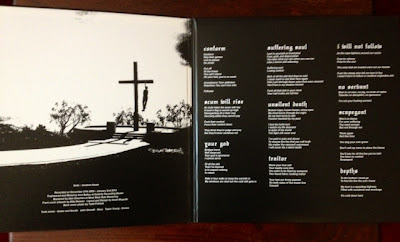 Honestly I don't know if any label puts together record packaging better than Southern Lord, this think looks awesome. Great gatefold sleeve once again on a really thick card like the two Black Breath records I have from them. 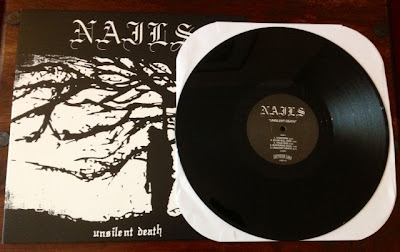 For anyone interested Nails sound like Chaos A.D era Sepultura meets Entombed meets Converge. It's heavy as fuck stuff that whistles past in no time and is over before you've had time to change your pants - 14 minutes to be exact. I'll be grabbing the newer record now for sure.