I pre-ordered this new release from Reaper months ago (i think) and then forgot all about it, so I was surprised when a package from them came through the letter box. Truth be told I'd ordered it on the strength of Reapers roster, I'd never heard the band before. 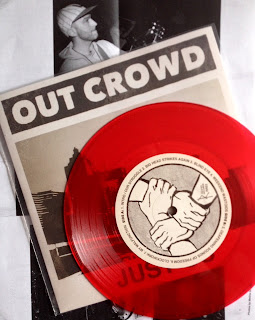 This is Out Crowd and their new 7" release Just Us. It's pretty good stuff actually, fast snotty old school hardcore, which is a bit of a change from some or Reapers recent releases. Not that's a bad thing at all.
Looks like i pre-ordered the more limited version on red which is of 400, Theres a green version of 1600 too. I don't know why I didn't order both actually. I'm thinking this was a late night half asleep purchase.

What does that centre hands drawing remind me of? Insted - Bonds of Friendship maybe?
Posted by J@screamingforrecords at 07:45

Email ThisBlogThis!Share to TwitterShare to FacebookShare to Pinterest
Labels: Out Crowd, Reaper Records