Back in December I wrote about the Survival 'Spirit Unchained' 7" that Carry The Weight Records put out (here). It was an awesome record that sold out fairly fast so i was lucky to get hold of one of the rarer red colours of 75. With the speed it sold a second press couldn't be long coming. I didn't think I'd bother with a second press actually but when it was announced I couldn't help but snag one. 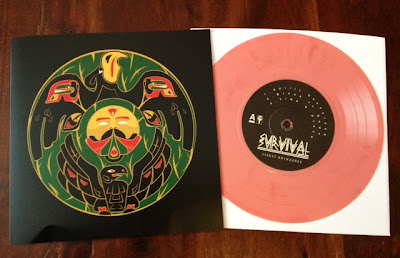 300 were pressed. 100 on Clear, 100 on Black and 100 on Pink. I don't care for black or clear records much so I opted for the pink version. Interestingly though the black version actually seems to have sold out before the other two versions. *Correction - All copies of the second press have now sold out. On listening to this again for the first time in a few months it really is a quality release that I'd recommend anyone into their Lockin' Out style stuff to check out. I still prefer the B side though. 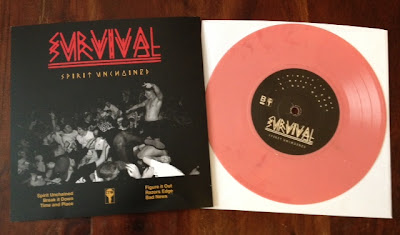 As I was pre-ordering the Survival record I noticed that CTW had another release up for pre-order and as they are a label that just don't seem to miss I thought I'd order that too. I didn't really need to read the description as I trust this label a lot but the little write up certainly had me intrigued 'metallic hardcore with a tinge of grunge. Think LOA but with more incense'. I like metallic hardcore and I like LOA, this could be good. 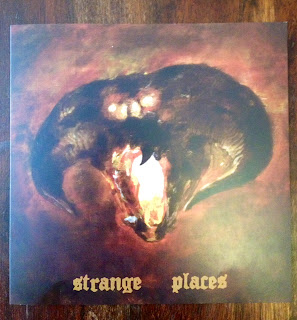 This is the debut release from Strange Places and features members of Basement and Wayfarer. It's damn good stuff too. I don't know how much grunge or LOA is going on though, not much for me, this to me sounds more like metallic hardcore mixed with doomy stoner rock. Like maybe a Black Breath with a stoner rock vibe??!? 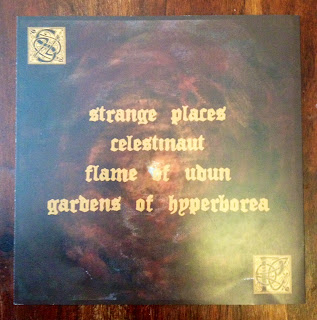 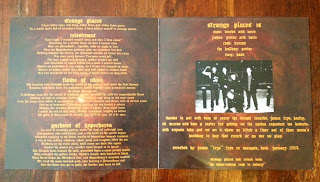 I reckon Mike would be into this for sure. When I arrived to pre-order this the red vinyl of 100 had already gone so I was left with the standard black press of 200. Think I'll be on the look out for one of the red versions now. 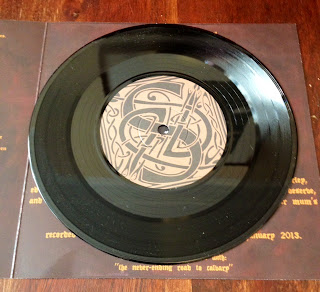 The inside cover reads "Strange Places will return with : The Never-ending Road To Calbary" Can't wait!! This band could get very interesting indeed.
Posted by J@screamingforrecords at 10:12